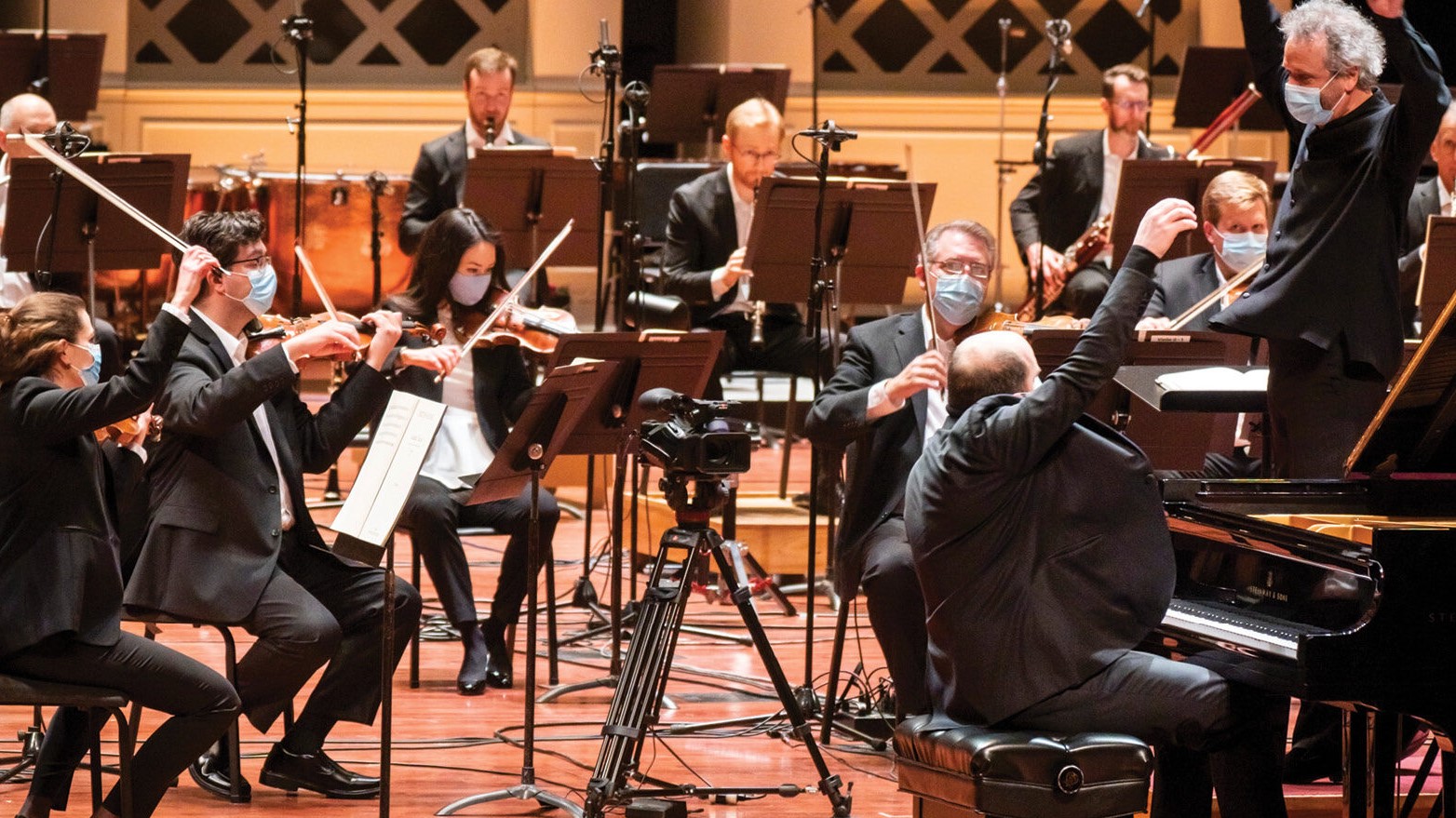 In Brief | In November, the Cincinnati Symphony Orchestra announced a new collective-bargaining agreement with its musicians, with more flexible work rules. The contract represents some of the fresh approaches that are emerging as orchestras and musicians across the country reconsider their contracts and business models. In the wake of the pandemic, will contracts like Cincinnati’s usher in permanent changes in how orchestras and musicians craft labor agreements?
Share
Change font size

Of the 53 member orchestras in the International Conference of Symphony and Opera Musicians (ICSOM), 26 are negotiating new collective bargaining agreements during the spring and summer, moving beyond the speedily negotiated side letters of the COVID-19 pandemic and formally codifying certain clauses. (Side letters are temporary or permanent modifications to the primary collective bargaining agreement.) Some of those changes, like a pivot to producing all-digital content, will fade or evolve as ensembles return to live performance. Other shifts, like allowing ensembles to break into smaller, more nimble ensembles—initially a strategy to accommodate social-distancing measures—may stick around longer to allow orchestras to more easily dive into their local communities.

Despite the tumult and turmoil caused by the pandemic, leaders in the orchestra field are confident about the industry’s immediate future. “There’s a lot of optimism,” says Meredith Snow, chairperson of ICSOM and a violist with the Los Angeles Philharmonic. “Everybody worked together toward some sort of compromise and reestablished a good working relationship and forged some trust through mutual sacrifice. That is going to bode well for all.”

The fruits of that working relationship are clear at the Cincinnati Symphony Orchestra, which kept the music alive during the pandemic through commissioning projects, small-ensemble performances, and digital content. In November, the orchestra announced a landmark, three-year contract that restored musician pay to pre-pandemic levels, with plans for modest raises and additional compensation for serving in community-focused ensembles. The new contract also redefines the way musicians’ time is structured on a weekly basis and enshrines a diversity task force launched during the pandemic.

The Cincinnati Symphony is not the only orchestra to announce a new, wide-ranging musicians’ contract. In recent months, orchestras large and small have announced agreements that establish new work rules, or offer more flexibility with community engagement and educational events, or restore salaries, or make room for digital and online media. A few contracts were even signed before the deadlines.

CSO President and CEO Jonathan Martin credits the orchestra’s ingrained culture of collaboration for the success of recent negotiations. “The pandemic compressed what was probably going to happen anyway, from a 10- to 15-year timeframe to a two- to three-year timeframe,” he says. “Orchestras are supertankers that can take years to turn around. This contract improves our ability to do that faster.” This departure from traditional contracts is progressive but not revolutionary, as many of the changes emerged directly from the orchestra’s one-year agreement during COVID-19 or from work rules relating to the orchestra’s status as the resident orchestra at Cincinnati Opera. Snow agrees that the CSO’s collaborative culture likely allowed for greater flexibility and says that Cincinnati’s contract could be a helpful blueprint for orchestras moving into the next phase of their business models. “What Colorado needs is not the same thing that Houston needs,” she says. “I don’t know what negotiations are going to look like in the spring, but we have to serve our communities better than in the past. And if that takes this kind of flexibility, then that’s where we gotta go.”

To get into the details of the new contract in Cincinnati, two of the agreement’s architects—Paul Frankenfeld, a violist with the Cincinnati Symphony Orchestra and the president of the American Federation of Musicians Local 1, and Robert McGrath, the CSO’s chief operating officer—discussed the longstanding, collaborative relationship between musicians and management and board that they believe was essential to creating such new agreements. Below is a transcript of that conversation, edited for length and clarity.

PAUL FRANKENFELD: Some musicians refer to flexibility as the management “F” word because it’s been used in a really abusive fashion in acrimonious contract disputes.

ROBERT McGRATH: I used that word enough at the negotiating table that I was gifted a coffee mug by one of the retiring members of the players’ committee that said, “flexible AF.”

McGRATH: Going back a bit, we began collective bargaining in the last week of February 2020 for a new long-term agreement. When we shut down in March, we delayed our discussions to August 2020 and agreed to a one-year temporary contract, with the goals of the board, the staff, the musicians, the artistic leadership, quickly aligning around a desire to make sure that we could return to performing as fast as possible, whether that was getting the whole orchestra back onstage or in smaller groups or as individuals.

FRANKENFELD: During those discussions, we laid a lot of the groundwork for the current agreement. The orchestra had an emergency fund, and we were paid our full salaries until September 2020. Going into the one-year agreement, the organization took an across-the-board 10 percent salary reduction, and everybody was anxious to get back to work in any way that we could. We looked at many of the contractual provisions that we had already from our time in the summers—where we subcontract for the Cincinnati Opera—and started applying them. That helped tremendously when we rolled up our sleeves and hammered out a true new master contract.

McGRATH: Paul, correct me if I’m wrong, but there seemed to be equally quick alignment around the priorities for the new three-year contract as well.

FRANKENFELD: Absolutely. It’s important to realize that we have worked to have a truly collaborative arrangement and relationship between board and management and players and union. That’s gone on for years.

McGRATH: First, we were absolutely committed to financial restoration for the musicians and the staff. The next priority was preserving the flexibility borne out of necessity during the pandemic season, making sure that we were leveraging the full skills of the orchestra to serve the community as robustly as possible. The two main areas of that flexibility are the way the workweek itself is scheduled for the orchestra and the other is the number of ways in which musicians can be assigned to smaller groups of non-conducted ensembles.

Within the workweek, traditionally, you have eight services a week of two-and-a-half hours each. Now, we have 20 hours available and up to 10 work calls and up to three services a day that we can structure however we need. That’s the big picture.

FRANKENFELD: There really was not much resistance to the changes, though we did agree to set stop times as new guardrails. There are concerts planned for next year that have us playing six 45-minute performances in a week, and that wouldn’t have been possible under our old agreement.

McGRATH: The other big change is how the orchestra can be assigned into different groups. For decades we’ve had musicians perform for education programs and in the community on a volunteer basis in exchange for some modest compensation or time off. Now, we’re seeking to find groups of musicians that would form at the beginning of the season and then work with our learning department and community engagement department to curate thoughtful programs throughout the year. Who’s going to invest time and effort into something that they’re just performing once? So that is now in exchange for some additional compensation as incentivization. But we need to be thoughtful about that programming, and to have a group of people that’s invested in time and commitment over the course of the season.

Musicians can also sign up for the sorts of things that come up in any given workweek that otherwise could only be accomplished through volunteer capacities, now for additional compensation. For instance, we did a performance for Martin Luther King, Jr. Day at the National Underground Railroad Freedom Center that involved a string quartet of musicians who opted into the program to be assigned. They performed this during a week where we didn’t have all 90 members of the orchestra performing on stage.

FRANKENFELD: We were very, very insistent that the programs weren’t compulsory. There hasn’t been a tremendous amount of enthusiasm so far to sign up for assigned ensembles, to be honest. But it’s brand new. For decades we’ve had musicians perform for education programs and in the community on a volunteer basis in exchange for some modest compensation or time off [known as service exchange], and that program took off in a year or two.

Aside from the flexibility, there’s a big thrust right now in the orchestra field to identify underrepresented musicians and give them every opportunity to come play auditions here. Things are headed in the right direction, but it’s important for orchestras to get ambitious about this simply because there’s a demand that they better reflect what the communities they serve look like.

McGRATH: We have a diversity task force that was adopted initially as part of our one-year agreement in 2020 and then again in the three-year agreement. It’s an outgrowth of years of work. The task force is dividing its work into three categories, focusing first on things we can do locally that are in our power to change. For example, we’re prioritizing the hiring of musician graduates of the successful Cincinnati College-Conservatory of Music Diversity Fellowship program [a partnership between the CSO and CCM] as substitutes with the orchestra. The second area of focus is data collection regarding the number of underrepresented candidates auditioning, and the third is discussing the things that require actual systemic change in the field.

The task force has also been empowered to make recommendations to the players’ committee to allow for contractual changes during the term of the collective bargaining agreement rather than just waiting to address all these issues again in three years.

FRANKENFELD: Necessity really dictated an awful lot of this in my estimation, but people are already taking notice and asking questions. We’re a small metropolitan area, very different from the demands of orchestras that have much larger population areas, such as New York or Los Angeles or San Francisco. But certainly, the one thing we’ve always felt is that the relationships that we’ve developed over all these years are worth their weight in gold.

McGRATH: Exactly. There have been countless times when both parties have compromised because the strategic long-term benefits of maintaining this culture supersede any one issue at any given time. I do think the agreement is groundbreaking and historic, but I’m not sure that any one individual concept is revolutionary. It’s the capstone of a culture that’s been in place for decades.

FRANKENFELD: There hasn’t been a work stoppage here in over 50 years. That’s remarkable for an orchestra of any stature, to be perfectly frank. And we’ve had a very, very successful launch to this agreement.

This article originally appeared in the Spring 2022 issue of Symphony magazine.