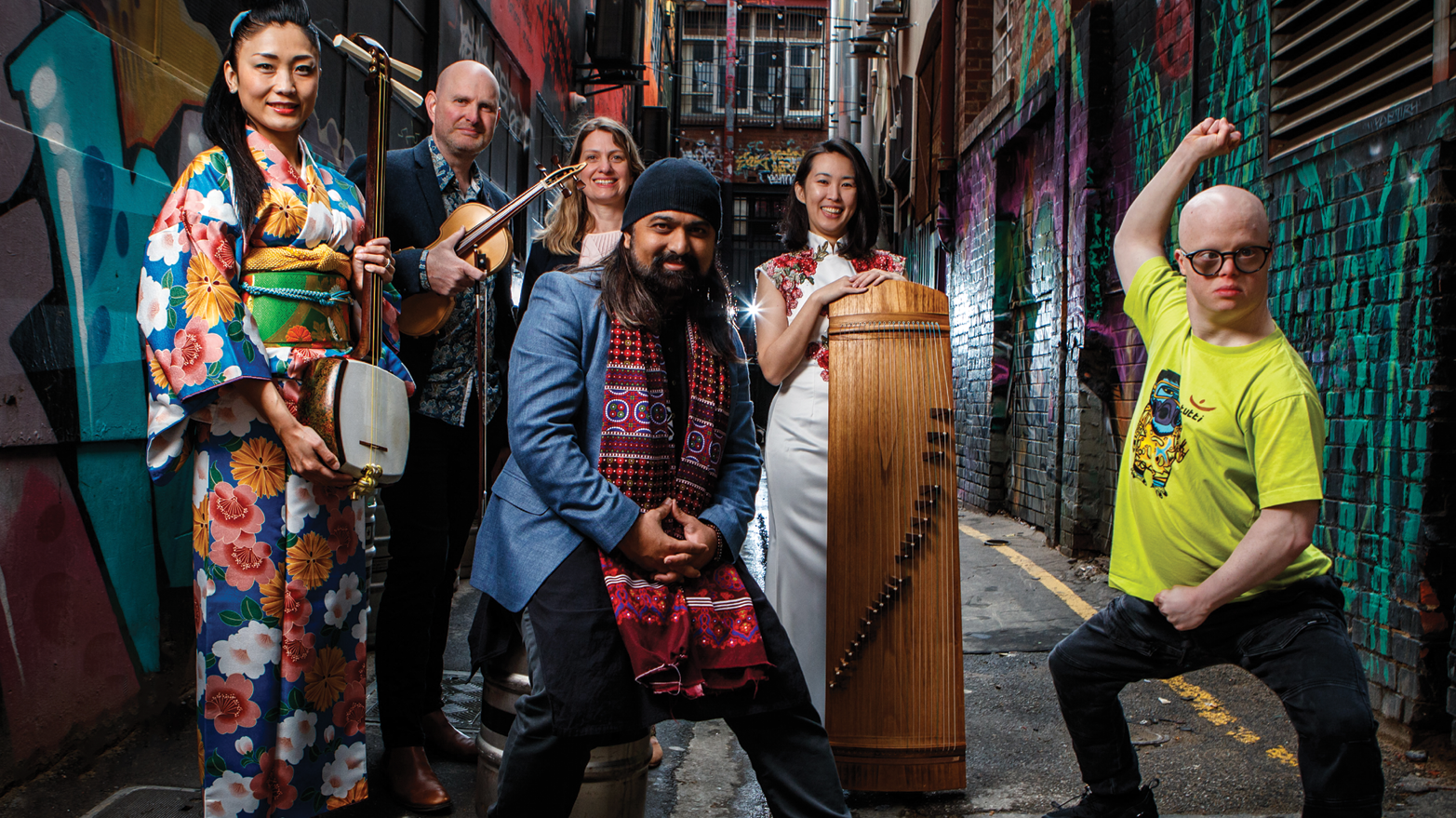 In Brief | The Adelaide Symphony Orchestra’s climate-change-themed Floods of Fire is innovative, but not in the way you might think. The composition is the product of a large-scale collaborative project involving South Australian arts organizations, community groups, and professional and amateur musicians. People from multiple backgrounds and groups came together to create the work—and the process may be more important than the result.
Share
Change font size

In Australia, the months between September 2019 and March 2020 are known as Black Summer. Even in a country where bushfires have been a fact of life for millennia, the scale was unprecedented: as much as 131,000 square miles—an area larger than New Mexico—was burned, “the largest in a single recorded fire season,” according to the national weather service. Some 33 people died, and conservative estimates projected that over one billion mammals, birds, and reptiles died, including national icons like koalas, kangaroos, and wombats in the millions.

Then, in a cruel twist of fate, large parts of South Australia were also hit with severe thunderstorms in late January 2020, with power loss to the Royal Adelaide Hospital and flash flooding after 2.6 inches of rain fell in three quarters of an hour. For many communities still reeling from the fires, the hurt and loss were compounded.

Faced with such devastation, there is a familiar template for arts organizations to follow. Hold a fundraising concert, hand out some comp tickets to firefighters, perhaps commission a short work from a local composer, and then move on to the business of one’s subscription season.

Instead, the Adelaide Symphony Orchestra is rethinking the idea of what community engagement means for an arts organization with a new program titled Floods of Fire.

It’s hard to explain exactly what Floods of Fire is, in part because the end result is less important than the journey to get there. Throughout 2020, the ASO invited a wide range of South Australian arts organizations, community groups, and professional and amateur musicians to a series of workshops. The aim was to have the entire state of South Australia represented: First Nations peoples, members of the state’s diverse migrant communities, artists with disabilities, schoolchildren, and many more. But instead of gathering them specifically to write music, the workshop participants told stories of fires and floods—not just stories of surviving disasters, but tales from various cultures explaining the significance of these natural phenomena.

Also at these workshops were composers and musicians from a wide range of backgrounds and disciplines—composers with training in Western classical music, certainly, but also many trained in non-Western and contemporary music traditions. Following these workshops, the stories were fashioned into music. But instead of individual composers taking these stories away and writing a piece of music, the music was written as a large-scale collaborative exercise, with everyone involved in the composition.

“It’s a real art,” says Adelaide Symphony Orchestra Learning and Community Projects Manager Elizabeth McCall. “It is something that is developing across the world right now, collaborative composition, but in an orchestral sense is really new. Music is this incredible way of telling a story. It communicates someone’s whole experience, often beyond words—so if we can get into people’s stories and help create that music, we are truly connecting with them.”

In the U.S., several orchestras have commissioned composers to create new works that gather input directly from local communities, to “crowdsource” the scores, including several projects previously covered in Symphony magazine. For its Miami in Movement project, the New World Symphony in Miami Beach, Florida, asked residents to submit audio and video clips about the past and present of the city, which composer Ted Hearne and filmmaker Jonathan Kane wove into a musical composition and accompanying video and photos. In California, the Pacific Symphony commissioned Beyond Land and Ocean, a symphonic portrait of Orange County for which composer Narong Prangcharoen met with hundreds of area residents from diverse groups over several years. At the Seattle Symphony, sound sculptor Trimpin held workshops with members of the city’s homeless community to design and build an instrument out of found, broken, and retired objects. At other orchestras, members of local Black and Native American communities have contributed to new works evoking, for example, their own cultural history or the natural landscape. These projects create closer bonds between orchestras and their hometown’s residents, and blur the line between passive consumer and active creator of new music.

For Floods of Fire, McCall explains, “Composers are working with a myriad of groups, including professional musicians, non-professional musicians, and members of the public who haven’t worked in music before. And most of the compositions come from the group as well, so it’s a real challenge for the composers to hear the musical ideas and develop them without imposing their own voice, but still allow their musicianship and skill as a composer to be evident in that work so that the orchestral work is a fully functioning piece.”

It’s a concept more familiar to the world of theater, where models like verbatim and participatory theater have long provided alternatives to relying solely on individual playwrights. And indeed, the idea for Floods of Fire came from Airan Berg, a European participatory theater director, who approached ASO Managing Director Vincent Ciccarello with a new idea about how an orchestra could more deeply engage with its community.

“Floods of Fire is an example of how ASO reflects the issues and concerns affecting our community today, by listening, connecting, and learning,” Ciccarello said when the project was launched in October 2021. “The project reflects everything a modern-day orchestra should be in 2021, accessible for all in the whole community, enabling the community to connect with and learn from other cultures in the development of new music for the orchestra.”

“We want to be an orchestra that is truly South Australian, and truly connected to the people here,” says McCall. “We want our music to tell those stories, and to really reflect them. We are a European tradition, but the Australian community is incredibly diverse, and we want that reflected in the music we perform. And the only way you can really do that is to find new avenues, because even when we are looking at commissioning you can’t be an orchestral composer without having had a specific journey in your musical development. And this was a way of us starting to explore other ways of connecting with people. This project really is about representing our community, and making music with them, and immersing ourselves with them.”

It is certainly an atypical model. What makes this project more remarkable is that no one—from orchestra management to the musicians to the government funding bodies that support the project—seems all that concerned about the outcomes, at least not in the way that anyone familiar with the timelines or funding arrangements of major arts organizations would recognize. “You just need time with people” when creating projects like this, says McCall. “That is one of the great challenges for the orchestra: we have this revolving program of concerts, like every orchestra does, and creating space in our schedule for that, when you don’t necessarily have a concert on, and it is purely the luxury of connecting through music.”

Even now, more than a year after the workshops were held, McCall isn’t totally sure how many pieces of music will come out of the process, or when they will be ready to perform. “It is our hope that we will present it in some outdoor concerts later this year,” she says, “but each element of the project will progress at the rate it needs to. That is also something that we have had to sit with, and we can’t push our timeline to make things happen. It requires quite a lot of patience, but it’s worth it.”

Arts SA, the South Australian government’s arts and culture grant-making body, has embraced the spirit of the project, offering flexibility and demonstrating an understanding of what the ASO is trying to do. Instead of requiring that funds granted in a financial year be spent that same year, as most funding bodies in Australia do, Arts SA has allowed the orchestra to roll monies over to accommodate compositions that are taking longer to develop.

The outcomes of Floods of Fire are also being assessed under a very different framework. The past 30-plus years of arts funding in Australia has been defined by two things: by ever-decreasing amounts of support, and by requirements that arts companies receiving public funds account for every dollar and demonstrate adequate return on investment.

“I have seen a draft of their report, and it is beautiful,” says McCall, in what must surely be the first-ever instance of someone describing a funding report as “beautiful.” She adds, “It really captures lots of experiences, and looks at certain themes across the impact of the project.”

Some of the works from the project have already received a public performance, at the ASO’s outdoor, family-oriented Festival of Orchestra in late November 2021: Singaporean-Chinese composer Zhao Liang’s treatment of the story of the phoenix, written in collaboration with composer Belinda Gehlert; Bulu Yabru Banam, by Grayson Rotumah and Luke Harrald, featuring water percussion and requiring the orchestra musicians to chant; and a work by collaborative composer Julian Ferraretto, co-written with students from Carlton School Port Augusta, played as the opener for a 200-person performance of Orff’s Carmina Burana.

“The audience came with generosity of spirit, and understood that this was a new project and a new way of working,” says McCall. “We had some of the artists and community members who had been involved in the compositions come to the performance, including a group of children who had come down all the way from Port Augusta [322km/200 miles] that day. It was an incredible experience for them. And these children who had never seen an orchestra before, let alone had their work performed by an orchestra, got applauded as composers. There were some beautiful moments of the audience really connecting with the project.”

There are more public performances on the way for later in 2022, but McCall couldn’t publicly announce those at press time, and given the fluid nature of this project, she’s not totally sure when anything will be completed. Regardless of whether the works from Floods of Fire enter the standard repertoire, or this type of collaborative composition becomes an example for other organizations around the world to follow, McCall has loved the journey that they have all been on together thus far.

“I’m not sure we would always work that way,” she says. “But for this project it is really fun, and quite freeing. And for the orchestra, we were also outside of our comfort zones, which is true for the musicians and the community members working within the project, too. And that felt fair—we all needed to be uncomfortable in order to move through this process together. It has been an incredible experience. And we have learned so much from it.”

This article originally appeared in the Summer 2022 print issue of Symphony magazine.