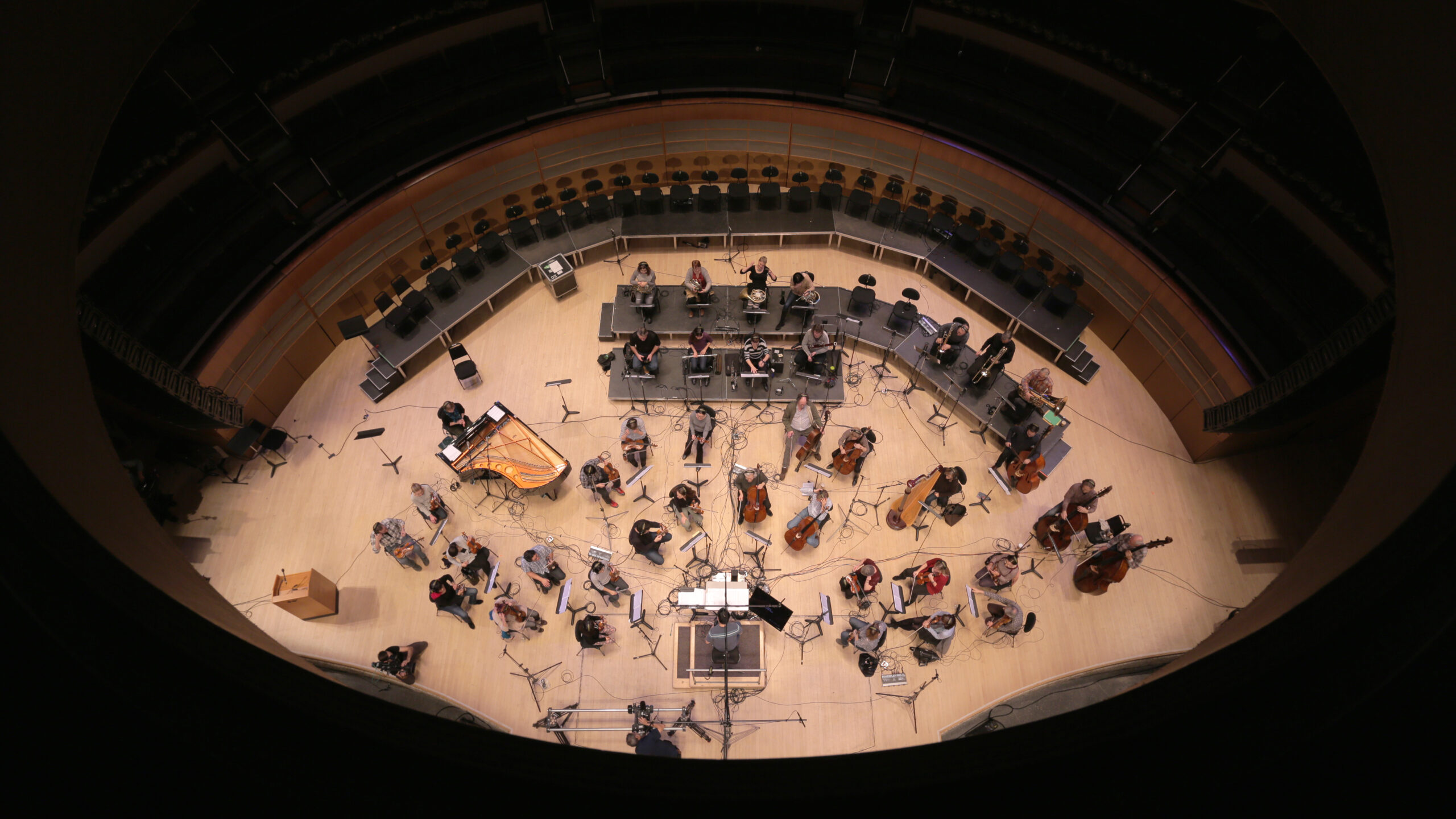 That’s what writer-director-producer and anthropologist Niobe Thompson said when composer and conductor Darren Fung approached him about performing his just completed orchestral score to The Great Human Odyssey, live with narration, synched to picture.

But slowly, the idea grew on him.

The Great Human Odyssey, and Thompson’s subsequent documentary mini-series Equus: Story of the Horse takes audiences on scientific and historic journeys that are anchored by beautiful cinematography, multiple Canadian Screen Award wins and an Emmy nomination.

“The films are, in themselves, stunning pieces of work.  Adding a live orchestra creates a magical immersive experience for audiences.” says Andrew Bennett, Executive Director of the Kitchener-Waterloo Symphony Orchestra.

Turning any film into a live orchestral show, even with the resources Hollywood studios have, is no small feat.  But when you are a small independent documentary production house, how do you create an affordable orchestral show that doesn’t fall off the rails?

The answer is technology.

The biggest challenge in performing live to film, is synchronization.  Taking lessons learnt from the film score recording world, technical director Harrison Lee worked with Fung and Thompson, to create a robust, three laptop system that is command central of the production.  All of the show’s moving parts are connected and synchronized through these computers. 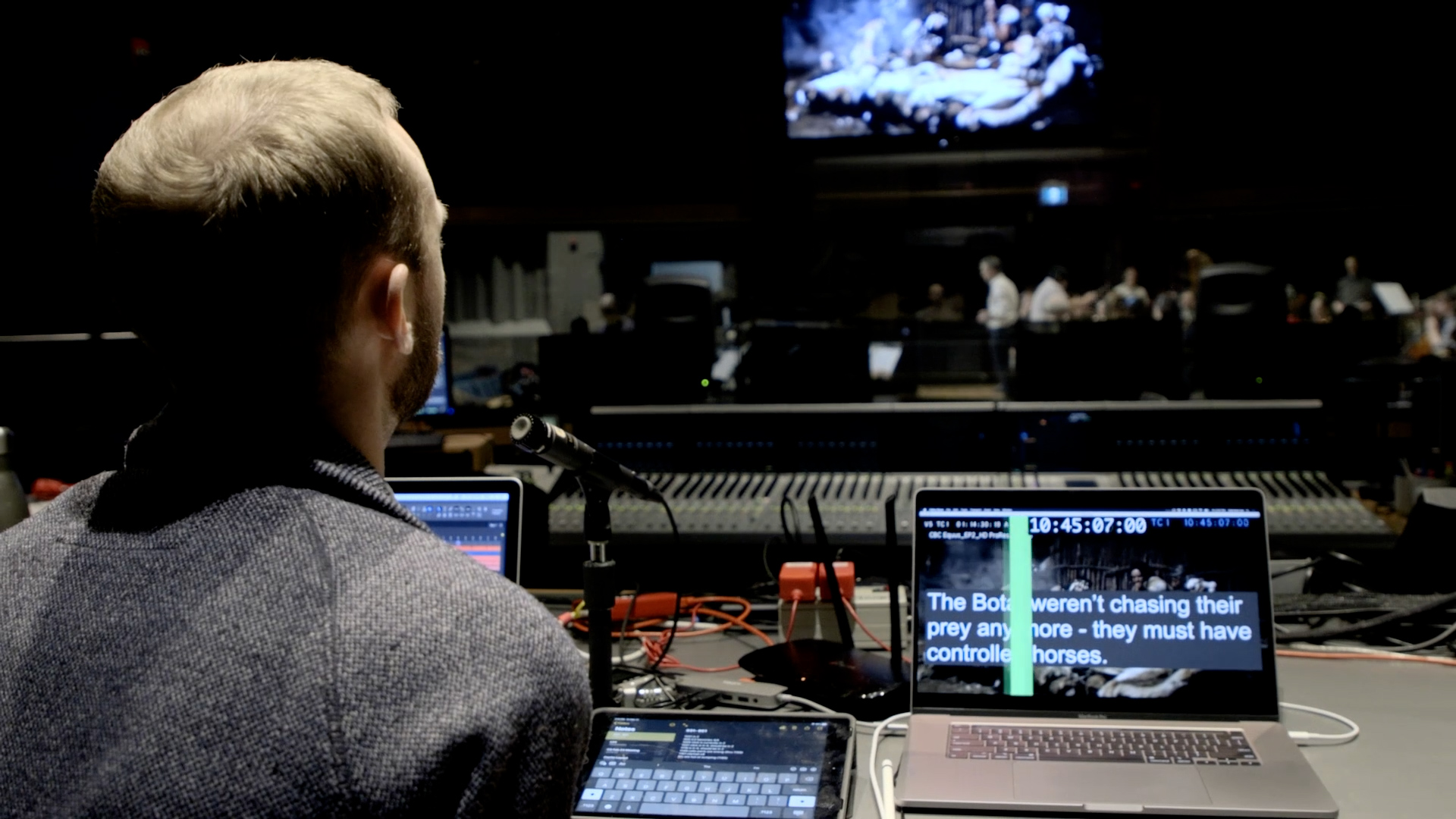 Technical Director Harrison Lee controls and navigates all of the moving parts of the production in a bespoke three-laptop “command central” for the Equus: Story Of The Horse In Concert. (photo credit Cailleah Scott-Grimes)

Orchestra members wear headphones – click tracks allow musicians to catch important “hit points” in a film with a minimal number of rehearsals.  While that isn’t new, Lee developed an app that allows musicians to use a cell phone on their stand to see what measure they are at.  For the trumpet player who doesn’t come in until measure 784, it is a Godsend.

Thompson, who narrates the shows live, has his own monitor that prompts and tells him what to say, when to say it, and how long he has to say it, using software that is normally used for automated dialogue replacement (ADR) in film post-production.

Thompson and Fung’s shows go through an extensive workshopping process, twice with MIDI realization, and once with a full orchestral run.  The goal of these workshops is to find the kinks, whether they be story-related, musical, or technical, before they cause a delay in rehearsal.

The biggest kinks deal with audio balance. In the film world, a mixer can always turn down the timpani, or carve out the sonic space needed for the narrator, but it’s not so straightforward in a live environment. The reality is, that you can never fully gauge balance with an orchestra, without an orchestra. Some changes require moving or changing a line of narration.  Other changes require a quick change of orchestration. As the principal creatives that travel and perform with their shows, Fung and Thompson not only have the authority to make those changes, but they add an authenticity and audience connection to the music and the film that you don’t get with a Hollywood blockbuster. The “command central” affords the team the ability to not only address these problems on the fly, but to be nimble and run an efficient rehearsal.

“The team anticipated all of the major issues with the performance of live scores to picture.  As a result we had three highly successful performances to sold-out houses,” says Jerrold Eilander, Director of Operations for the Edmonton Symphony Orchestra. 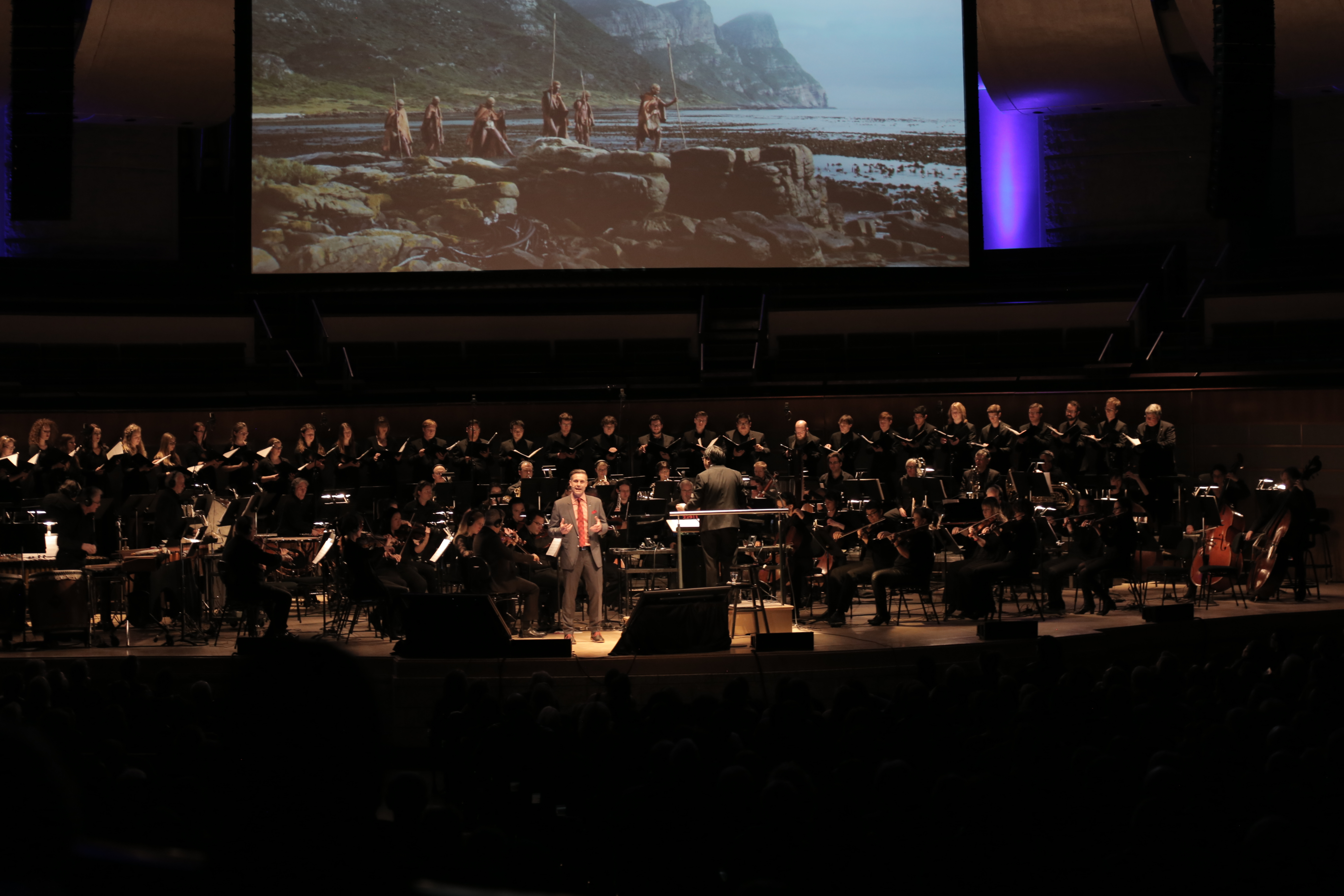 As an independent producer, Thompson owns his films and can set price points that are much more amicable to orchestra budgets.  By also providing a one-shop-stop for the technology, including a tech director and a headphone system, a show’s price point becomes even more attractive.  The result is a price-conscious concert that engages an enamored audience.

Click here to see footage from the workshop of Equus: Story of the Horse, In Concert. 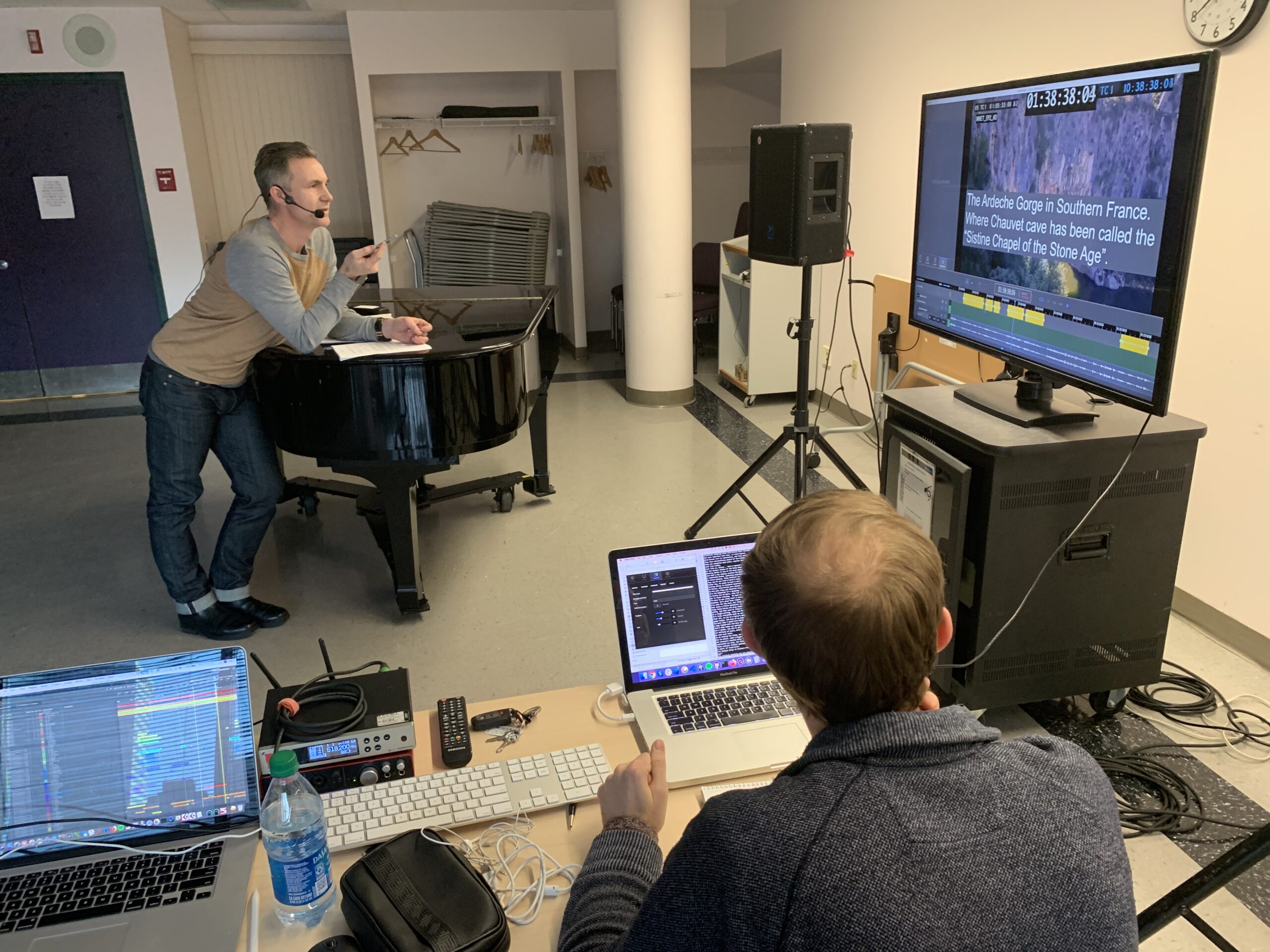 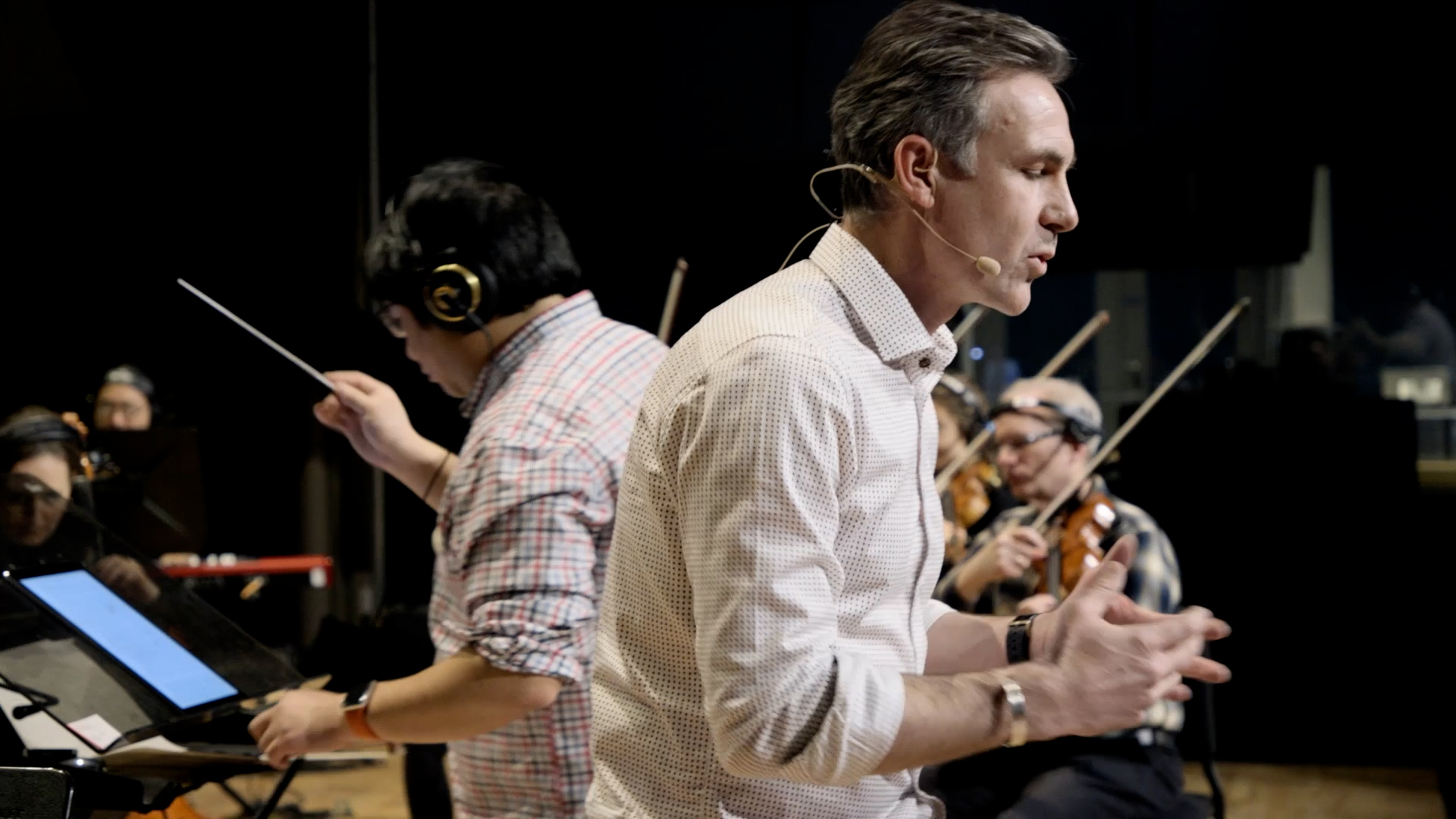 Director-Producer-Host Niobe Thompson narrates as Darren Fung conducts his score in an orchestral workshop of Equus: Story of the Horse In Concert. (photo credit Cailleah Scott-Grimes) 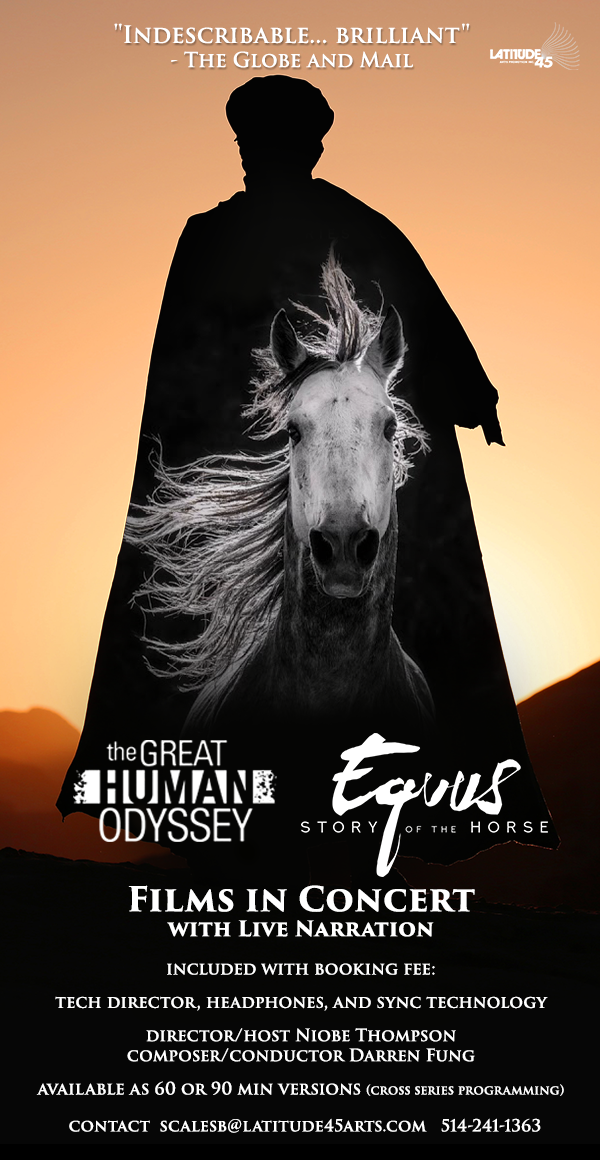